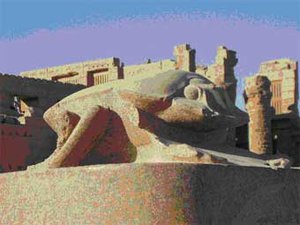 About the ancient Egypt scarab

Just a little information in English, for those who appreciate it. 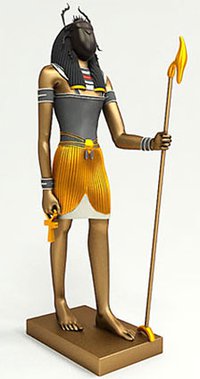 By far the most important amulet in ancient Egypt was the scarab, symbolically as sacred to the Egyptians as the cross is to Christians.

Scarab dung beetles lay eggs in a pellet which they roll along and the Egyptians regarded this action as an image of the sun and its course through the heavens, rolled by a gigantic beetle. Scarabs are associated with the Egyptian god, Khepri. It was Khepri that pushed the sun across the sky. The scarab beetle became an ancient Egyptian symbol for rebirth, the ability to be reborn. Each day the sun disappeared, always to rise again and be reborn the following day.

The god Khepri, which literally means "He who is Coming into Being", was a creator god and a solar deity. He was represented as a scarab or dung beetle, or as a man with a beetle head. The scarab beetle was observed to roll it's eggs in a ball of dung along the ground, and the ball was identified with the sun. The baby beetles were seen to emerge from the primeval mound and so dung beetles were thought capable of spontaneous creation.

Scarabs were worn as jewellery and amulets in ancient Egypt. The Heart Scarab, which had hieroglyphic inscriptions on the back, was often buried with the dead to ensure the rebirth of the deceased in the afterlife. They were placed over the heart of the deceased to keep it from confessing sins during its interrogation in the "Weighing of the Heart" ceremony.

Most of the scarabs are made of steatite painted blue or green. Their length varies between 4.7 and 11 cm, their width between 7 and 8.9 cm. Most of them are pierced for threading.

On the basis of their inscriptions the scarabs can be divided into five groups (in parentheses the number of scarabs of the type found on several sites): 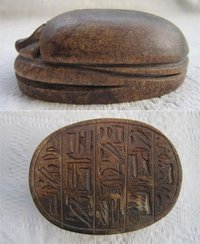 The scarabs are likely to have been made at the same

time, in or after the 11th regnal year. The scarab beetle was a symbol of the sun god Khepri, and glazed materials were called tjehenet ('shining') in Egyptian, so the shining scarabs refer to the king, the dazzling Sun himself.

Main article: The lion hunts of Amenhotep III during the

first ten years of his reign

The inscriptions on the lion hunt scarabs emphasise the pharaoh's strength and bravery by recording that Amenhotep killed over a hundred lions (102; 110 on some scarabs) during the first ten years of his reign. These have the shortest inscription (7 lines), their average length is 7,7 cm. The lion hunt scarabs vary the most in size; the smallest scarab is 4,7 cm long, the largest is more than twice its size with a length of 9,5 cm.

The so-called marriage scarabs actually refer not to the marriage itself, and neither do they mention a marriage date. They record the name of Amenhotep's chief queen Tiye (following that of her husband), along with the names of her parents, as if to explicitly state her non-royal birth: the name of her father isYuya, the name of her mother is Thuya; she is married to the great king whose southern border is at Karoy and whose northern is Naharin. Tiye's importance is shown by defining the boundaries of the empire in terms of her. The length of the inscription on these scarabs is 9-10 lines, the scarabs' average length is 8,5 cm.

The lake scarabs commemorate the construction of an artificial lake for Queen Tiye in the 11th regnal year. On these, the name and titles of the pharaoh are followed by those of Tiye, the names of her parents, then the description of the lake that was dug in Tiye's town Djaruha. The lake was 3700×700 cubits large, and the royal couple was rowed on the lake in the royal barge Aten-tjehen. The name of the boat means 'Shining Sun-disc', this is the first appearance of this name which later becomes an epithet of the king himself. The lake scarabs vary the most in their texts, but the differences don't affect the meaning of the text itself. The text is 11 lines long, the average length of these scarabs is 8,4 cm.

The bull hunt scarabs record that in the 2nd regnal year Amenhotep, followed by his soldiers and officials, went to Shetep (possibly the area of Wadi el-Natrun) on his barge Khaemmaat ('Appears in Truth'), charged at wild bulls by his chariot and killed them. On the first day he slayed 56 bulls, four days later he killed 40 of them. The bulls had been previously surrounded with a ditch.

Hunt was not only a favourite pastime for the pharaohs, it also symbolized the ruler's strength and his victory over the forces of chaos, thus it equalled victory on a battlefield. These scarabs also list the titles of the king and mention Tiye.

The bull hunt scarabs have both the greatest length (9,9 cm) and the longest text. The only scarab which doesn't have its back carved in the shape of a beetle is among these scarabs. This one has two longitudinal holes for suspension.

The Gilukhepa scarabs commemorate the arrival of Princess Gilukhepa, daughter of Shuttarna II of Mitanni into the pharaoh's harem in the 10th regnal year. She had a retinue of 317 ladies-in-waiting. Tiye is also mentioned on the scarab. The length of the text is 10 lines, the average length of these scarabs is 7,2 cm.